What is Particulate Matter (PM)?

With all engines, what goes in must come out. If you put in 1kg of fuel and 25kg of air, at the other end the result will be 26kg of exhaust emissions. All the atoms that went in will have come out too, but not necessarily as part of the same compounds they were in before.

In a theoretically perfect combustion, carbon dioxide, water and nitrogen are the end products.

In reality, the incomplete combustion of diesel fuel results in emissions that include oxides of nitrogen (NOx), carbon monoxide (CO), carbon dioxide (CO2), water (H2O) and unburned hydrocarbons (HC). There are also unburned carbon particles, as well as engine oils, soot and ash particulates, which are known as particulate matter (PM).

The diesel particulate matter (DPM) is the visible cloud of black smoke that appears from engine start-up and continues to appear when engine is running.

Before the advent of Diesel Particulate Filters (DPF’s), soot particles are released into the atmosphere at the end of the combustion process causing health and air quality problems. DPF’s are fitted after the catalytic converter to trap these particles. DPF filters also play a small part in the reduction of noise between 10-12DB. The diameter of the soot particles is close to 0.09 microns, which are made mainly by carbon and hydrocarbons. The principle of the Diesel Particulate Filter (DPF) is to collect the sooty particles and periodically burn them off.

It needs to be noted that the lifespan (operation interval) of the DPF/Catalyst combination is between 8000 and 12000 engine hours. The natural combustion of those particles takes place around 550°C. This is known as passive regeneration. 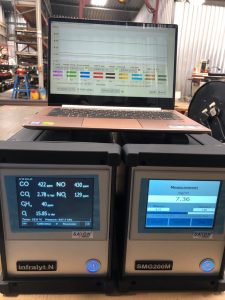 Rush Exhaust & Rush Enterprises develop the newest wash coat formulations and innovative catalyst coatings for applications all over the world. With profound knowledge in the design and technical expertise, co-operation with OEMs, and accredited test labs our R&D achieves an outstanding performance of the catalysts and Diesel Particulate Filters.

We work closely with our customers in order to meet all their requirements and to satisfy their demands. Tailor-made Catalyst and Diesel Particulate Filter solutions and completive precious metal amounts combined with our special coatings result in low light-off temperature, high durability, and performance of our Catalyst and Diesel Particulate Filters.

Our advanced manufacturing equipment allows the coating of standard honeycombs (metallic, wire mesh, and cordierite/SIC) as well as substrates with structured designs.

Rush Exhaust & Rush Enterprise’s patented (Patent No: RP 217451) IMS design proved a significant reduction of PM and all other emissions in many applications. The total PM reduction reached up to 95% in South African and American mining applications with continuous passive regeneration.

We use cookies on our website to give you the most relevant experience by remembering your preferences and repeat visits. By clicking “Accept All”, you consent to the use of ALL the cookies. However, you may visit "Cookie Settings" to provide a controlled consent.
Cookie SettingsAccept All
Manage consent

This website uses cookies to improve your experience while you navigate through the website. Out of these, the cookies that are categorized as necessary are stored on your browser as they are essential for the working of basic functionalities of the website. We also use third-party cookies that help us analyze and understand how you use this website. These cookies will be stored in your browser only with your consent. You also have the option to opt-out of these cookies. But opting out of some of these cookies may affect your browsing experience.
Necessary Always Enabled
Necessary cookies are absolutely essential for the website to function properly. This category only includes cookies that ensures basic functionalities and security features of the website. These cookies do not store any personal information.
Non-necessary
Any cookies that may not be particularly necessary for the website to function and is used specifically to collect user personal data via analytics, ads, other embedded contents are termed as non-necessary cookies. It is mandatory to procure user consent prior to running these cookies on your website.
SAVE & ACCEPT